Finally, security hardware catches up with the 21st Century

The Downlow – We’ve been waiting. Watching various providers market the futuristic ‘Jetsons’ home that is completely automated from the touch of our smartphone. This technology is up and coming, and works great today with even greater promise for tomorrow. However, in reality 90% of the time you will be interacting with your system from the main panel. It is the device seen hanging on the wall, probably near your main entry, that you walk by hundreds of times each week. The brains behind your system, it controls everything from managing the security and automation points to informing the viewer of current status. The security devices we have tested to date have been, well, lackluster. When it comes to Touchscreen in the security world, Fisher Price makes a better unit in the ‘5 and Under’ section. To someone who spends their day with technology and depends on an arsenal of laptop/tablet/smartphone for productivity, units tested from major security players have been very disappointing in the area of ergonomics, control, user interface, and aesthetics. (Putting a glossy-grey piece of cardboard around a 2.5″ depression-sensitive screen does not make a 10″ ‘Touchscreen’ in our book)

The player. We have actually discussed wall-mounting an Android Tablet as the main control point, and installing the ‘actual’ control out of sight in a utility area. Fortunately Qolsys has beat us to the punch and released a fully functional control unit based on a 7″ Android Tablet. And it actually looks and works like you would expect in the modern world.

Check out the video below for a fast-paced overview. 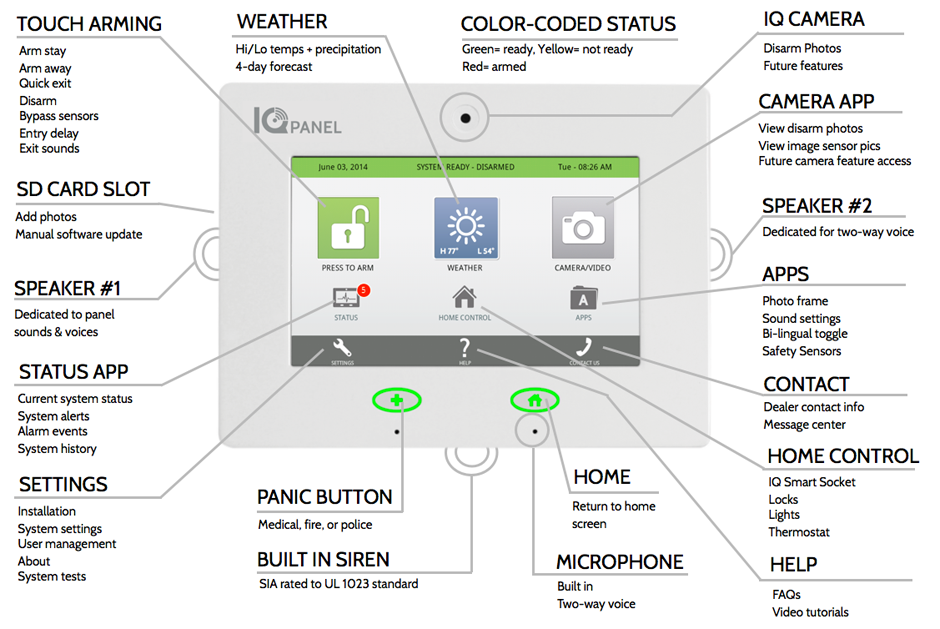 Security and automation in a modern container